Don’t Make This Mistake With Your College Loans

The average debt that college students are graduating with continues to rise.

Nearly seven out of 10 graduating seniors in 2015 left college with student debt, according to a report from the Institute for College Access and Success (TICAS).

The average debt of the Class of 2015 was just over $30,000. That’s a four percent rise over the previous year and represents a historic high.

Borrowers repaying the average debt will face college loan payments of more than $300 a month for 10 years.

Nineteen percent of the college debt came from private lenders, as well as state programs, while the rest originated with the federal government.

The average debt loads of graduates varied dramatically by state. As you can see from the charts from TICAS’ October 2016 report, graduates strapped with the highest debt live in the Northeast while young grads in the West had the lowest levels of debt. 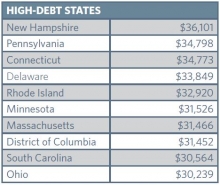 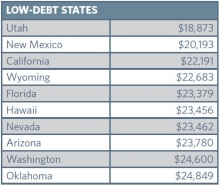 http://ticas.org/sites/default/files/pub_files/classof2015.pdf)
Avoiding College Loan Troubles
To avoid trouble when borrowing for college, here are some things to keep in mind:

1. The best loans for students to underwrite their college years come from the federal government. The loan that students should obtain first is the federal Direct Loan.

Here is why the Direct Loan is superior:

Regardless of their income, students qualify for the loan if they are enrolled at least half time and complete the FAFSA.

Students receive the same rates regardless of credit scores.

The loans offer student repayment plans based on a grad’s current salary.

The Direct Loan is designed strictly for students. Borrowers must begin repaying these loans shortly after graduating or leaving college.

While colleges should inform borrowers of the availability of federal dollars before accessing private lending, not all colleges do so.

3. Some states offer state loan programs, but the TICAS report noted that they generally offer more expensive terms. These loans also typically don’t have the protections that the federal programs have.

State loan programs are more similar to private loans. Earlier this year, The New York Times and ProPublica conducted an investigation of the New Jersey state loan program, which is the largest in the country. The report revealed that the program won’t discharge loans for co-signers even if the student borrower dies.

4. Families should conduct their due diligence when exploring whether a college is worth the student going into debt.

A tool you can turn to is the federal College Scorecard. It provides such information as the beginning salaries of graduates, graduation rates, and the average federal college debt of its students.

Wealth Transfer Guide: A Step By Step Overview On Transferring...

5 Tips to Consider When Giving Money to Your Grandchildren

Six Ways the CARES Act May Impact Your Student Loans