Is a College Degree Worth the Price? The Latest Twist

For skeptics who question whether a college degree is worth the escalating cost, a new studyopens PDF file from the Pew Research Center, answers the question with a resounding “yes.”

Not surprisingly, millennials who possess a bachelor’s degrees are earning more than high school graduates of the same age, but what you might find surprising is how the young college grads report being better off in many other ways as well.

Pew concluded that the wage premium for members of this age group earning a college degree was at a record high. The median salary for a millennial with a bachelor’s degree was $45,500 versus $28,000 for workers with a high school diploma. 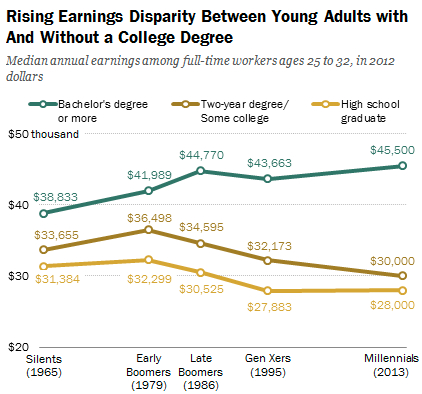 More Benefits For a College Degree

In addition to higher salaries, college-educated millennials also enjoy lower unemployment and poverty rates than their less-educated peers. They are also more likely to be married and to be more satisfied with their jobs. 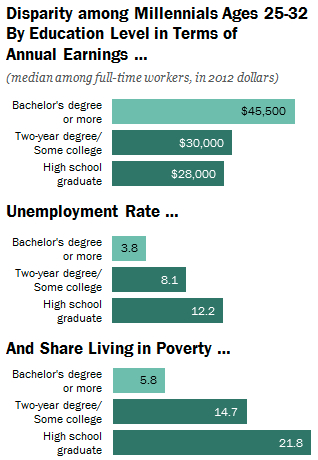 The report notes that the “largest and most striking disparities between college graduates and those with less education surface in the millennial generation.”

In backing up its claim, Pew noted that when Baby Boomers were the same age as millennials, high school graduates earned 77% of what a college graduate made. Today high school grads only make 62% of what the typical college-educated Americans earn in this age group. In addition, 22% of these young Americans with high school diplomas are living in poverty versus 7% of Baby Boomer when they were in their late 20 and early 30s. 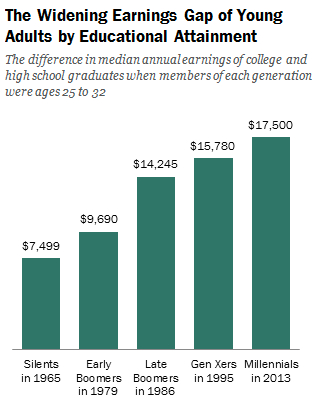 A key reason for the similarities of salaries among different generations of workers can be traced to the shrinking value of a high school degree.

The globalization of labor markets and the digital economy has helped to dry up good middle-class jobs and high school grads have been particularly hard hit.

The New Rules for Mortgage Shoppers

Is Your Credit Score Meaningless

Wealth Transfer Guide: A Step By Step Overview On Transferring...

5 Tips to Consider When Giving Money to Your Grandchildren

Six Ways the CARES Act May Impact Your Student Loans