By Dowling & Yahnke Staff on May 21, 2013
Categories: FINANCIAL PLANNING

Can you hear the noise?

I’m referring to the celebrating that stock market watchers make when the stock indexes are breaking records.

With the stock market in an upbeat mood recently, this is as good a time as any to examine just what these benchmarks are.

While thousands of stock and bond indexes exist across the globe, here is a quick snapshot of some of the most popular ones:

This is the granddaddy of all stock benchmarks and the one that newscasters refer to each day when recapping what happened on Wall Street.

Charles H. Dow, a cofounder of The Wall Street Journal, unveiled The Dow in 1896. This average tracks the performance of 30 large American corporations including Coca-Cola, Verizon Communications, Boeing and Intel. The oldest company in The Dow is General Electric that was added in 1907.

The S&P 500 Indexopens PDF file , which was unveiled in 1957, has been widely regarded as the best single gauge of  U.S. large-cap stocks. This index covering 500 leading corporations includes such household names as General Mills, McDonald’s, Ford Motor, Starbucks and Amazon.com.

Here is a chart of the 10 largest corporations in the S&P 500 Index: 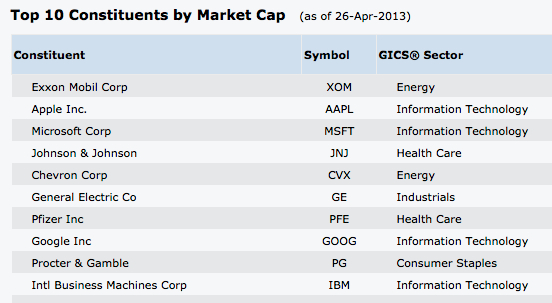 The MSCI EAFE (that’s what everyone calls it) is the most popular foreign stock index. It follows corporations in 22 developed countries such as Australia, France, Germany, Hong Kong, Japan, Switzerland, and United Kingdom.

The Russell 2000 is the best-known index for small-cap American companies. Just as the name suggests, there are 2000 smaller companies in this index. While many names would be unfamiliar to you, here are a few that you will probably recognize: Alaska Air, Revlon and Caesars Entertainment.

The Purpose of Indexes

A major reason why stock and bond indexes exist is to allow institutional investors to compare the track record of money managers. If a pension fund manager, for instance, is overseeing a portfolio of blue chip stocks, his or her success (or lack of it) can be compared to a large-cap stock index such as the Standard & Poor’s 500 Index.

If you are a mutual fund investor, you should be making the same kind of comparisons. Contrast the returns in your funds with their appropriate benchmarks.

The Dangers of Chasing Yield

How to Handle Investment Winners and Losers