How Lifestyle Inflation Is Affecting Your Savings

You may have heard the phrase “lifestyle inflation,” or seen articles about families making well over six figure incomes and still living paycheck to paycheck.  This phenomenon is also known as “lifestyle creep” and refers to the tendency to let spending rise as income rises.

In college and sometimes just after college, without much income, Americans often live with roommates and have secondhand or “assemble-your-own” furniture.  There might not be a car, or if there is one, it’s an old and secondhand. There isn’t much money to spend, so you optimize what you have.

Then comes the first “real” job, and along with it more money.  After student loan payments are made, the extra income might go to upgrade the car, buy a new sound system, or splurge on expensive drinks at the hip bar downtown instead of hanging out with the keg in someone’s backyard.  New clothes for the job probably won’t be from the expensive store in town, but will need to be job-worthy at least.  A smart twenty-something will set aside some of this new money for an emergency fund and/or retirement.

As responsibilities grow, usually income increases, as does the pressure we might feel to keep up with new colleagues and possibly even new neighbors.  Years ago, a three-bedroom house might have been perfectly fine for a family of four, but at the new job everyone has a four-bedroom house.  No one wants their kids to be (or feel) deprived.  Now that you and your spouse just paid off the student loans, all that extra cashflow can go to the new house or higher entertainment expenses, especially as the kids grow older.

At this point, your lifestyle is similar to that of colleagues and neighbors, and your kids have the same games and toys as their friends.  The problem is that it takes both salaries to maintain all the spending.  Even though you’re making much more than when you were younger, you’re still living paycheck to paycheck.

Fortunately, there is another way that leaves you with more financial freedom, no matter the size of the salary.  If you defend against lifestyle creep by not allowing your living expenses to rise along with your income, you can save more and spend less.  Once you understand what you value in life, you can spend your money where it brings you the most happiness.  This allows you to give up spending on things that don’t make you happier without feeling deprived.

Studies have shown that though we get a brief uptick in happiness from a new purchase, our baseline level of happiness remains about the same throughout time.  You don’t need top-of-the-line, expensive cars to get important safety features.  You don’t have to purchase the most expensive house to get the living space that suits your family.  By optimizing your spending, you’ll end up with far more in the bank. 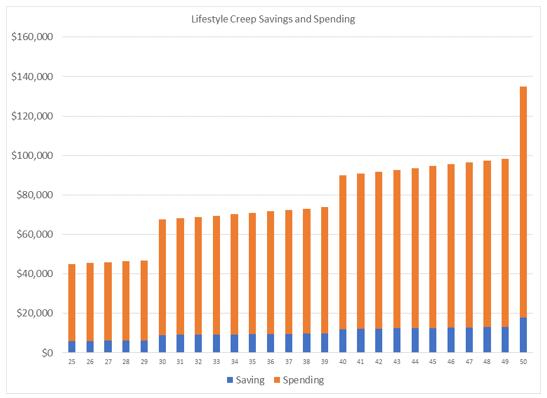 Now let’s consider a similar couple, with the same income assumptions, who decides to fight against lifestyle creep.  They freeze their spending (allowing for 1% annual inflation) at age 30, and the remainder after taxes is saved.  They amass about $454,000 from the savings alone. 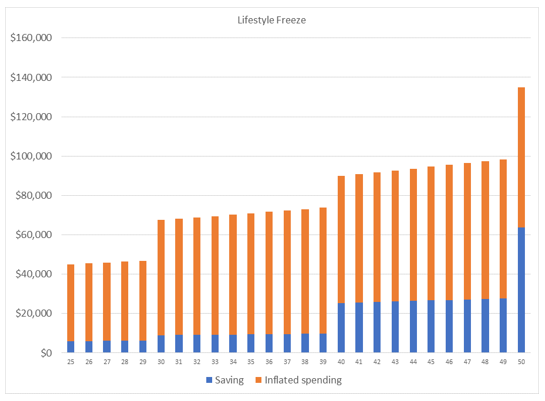 If both couples let their accumulated savings benefit from the power of compounding until they turn 65 at a 5% rate of growth, the Lifestyle Creep couple will have almost $558,000 for retirement.  However, the Lifestyle Freeze couple have nearly $944,000. 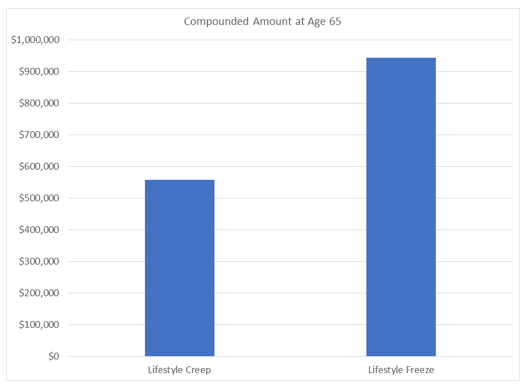 In these examples, we’ve used very simplified assumptions, but they show the power of not allowing your lifestyle to inflate along with your income.  A technique to combat lifestyle inflation without too much deprivation is to contribute your salary raises to your retirement account rather than spending it.  Maintaining a significant savings rate and watching your spending will not only help your retirement assets grow, but will also help your happiness in the long run.