Why You Shouldn’t Panic

The stock market is the only market where things go on sale and all the customers run out of the store….

We are sharing this tweet, which takes a wry look at investor behavior, because it’s important to remember the impulse of investors to bolt when the stock market is struggling like it has since the start of 2016.

Long-term investors should try not to get stressed out about the short-term direction of the market. Of course, if your time horizon isn’t long, your money should be invested elsewhere.

There certainly has been a tremendous amount of coverage of the stock market gyrations since the start of the New Year. What you shouldn’t do, however, is assume that the intense media focus that inevitably appears when the market drags us along on a thrill ride means that you need to take some kind of action.

Here’s a chart of what’s happened to the three major benchmarks – Standard & Poor’s 500, Dow Jones Industrial Average and the NASDAQ – in the past one-month period ending on Jan. 8, 2016. Looking at the chart, you can’t miss seeing the precipitous slide since the end of the year. 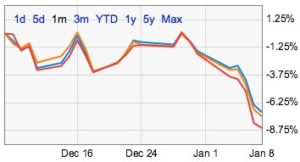 Admittedly, the steep drop looks scary and the negative returns have caused some investors to run for the exits.

But now let’s take a longer perspective on what’s been happening on Wall Street by checking stock returns during past 12 months. When you take the longer view, the picture doesn’t seem so dire. 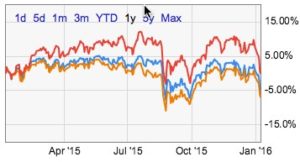 The one-year chart shows that stocks are close to what they were back in January 2015. In addition, the current equity drop isn’t even the worst that occurred during the past year.

Over decades, stocks have significantly increased in value, but over some shorter time periods, such as a day, a week, a month or even a year or two, stocks have disappointed.

To illustrate this, let’s take a look at the three major stock benchmarks over the past five years. 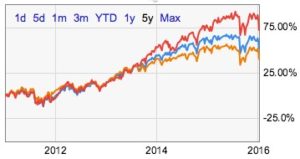 During these five years, equities have taken their hits, but over all they have rewarded patient investors.

The behavior of stocks might seem infuriating, but it’s their built-in volatility that makes them valuable. If they exhibited the steady reliability of a certificate of deposit, the returns they generated would be as low as what you can expect with a CD.

Don’t listen to the short-term noise of the market. Just tune it out and stick with your long-term investment plan.