Worried About Investing at a Peak?

As stock markets climb to all-time highs, many investors with cash on the sidelines have been asking themselves – is now really a good time to invest?  Aren’t we at another market peak?

Well, let’s just say hypothetically that we are at a market peak – and flashback to October 2007. Almost a decade ago, the S&P 500 was trading at an all-time high, just over 1800. Equity valuations were still humming along as the underlying fundamentals of the housing market were eroding right under our feet. The financial crisis took hold in 2008, first Bear Stearns collapsed, followed by Lehman Brothers.  The “Great Recession” ensued, a worldwide financial market meltdown we hadn’t seen in over 75 years.

Now, let’s say as luck would have it, that you had confidently invested $1,000,000 of your hard-earned money in a 60/40 balanced stock/bond portfolio on October 31, 2007, at what ended up being the peak of that market cycle. The absolute worst-case scenario.  How soon would your portfolio have recovered?  What would your portfolio look like today? 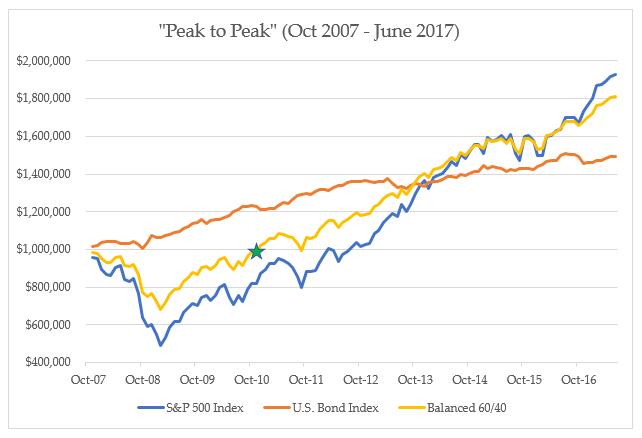 As we can see from the chart, although your balanced 60/40 portfolio would have dropped nearly 32% from the peak in October 2007 to the trough in March 2009, if you had stayed invested, it would have rebounded in just over three years, exceeding the initial investment by December 2010[1]. Moreover, by June of 2017, your portfolio value would have climbed above $1.8 million.  Had you invested in a 100% stock portfolio at the peak in October 2007, your portfolio would have exceeded its initial value by March 2012.  This is an absolute worst-case scenario, as most portfolios are more broadly diversified.

Dimensional Fund Advisors (DFA) recently released a study of the last six market downturns of at least 20% since the 1970s. They concluded that even if you invested in a 60/40 strategy or a 100% global equity strategy at the high point before the decline, your portfolio would have resulted in growth within five years[2].

In summary, the Great Recession produced a market drop from peak to trough, the likes of which we had not seen in more than 75 years. However, that was the absolute worst-case scenario, and a recovery still happened with positive returns within a few years.  So, let’s say you do invest now, and a bear market happens to be on the horizon (which no one can predict), with only a 10% or 20% pullback – less than half of what we witnessed in the financial crisis.  With history as a guide, if you stay invested, growth should result within the next few years.  So, if you can comfortably say your time horizon for a new investment is greater than five years, preferably 7 to10 years through a complete market cycle, you should invest confidently, and expect to see positive future portfolio growth!

[1] Chart includes returns of the S&P500 Index, Barclays US Aggregate Index and a 60/40 blend of the two indices