What’s Happened to Americans’ Net Worth?

When the recession struck back in 2007, American households were worth $67.4 trillion dollars.

At the depth of the recession, Americans’ net worth had plummeted to $51.4 trillion.

Today, American families would appear to have recouped nearly all of that lost money.

The Federal Reserve Bank of St. Louissays that households are now sitting on $66.1 trillion. That pencils out to a 92% recovery.

But that figure is wildly misleading, according to the latest annual report on household wealth from the St. Louis Fed that was released on May 30.

Only an estimated 45% of inflation-adjusted household wealth has been recovered. Millions of Americans are still waiting for a recovery.

Why the Wealth Hasn’t Returned for Most Americans

Here’s why the net-worth recovery is misleading: 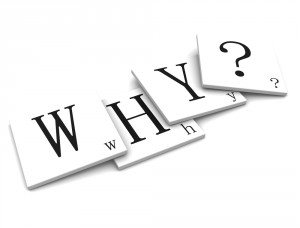 There are now 3.8 million more households in the United States than there were when the recession hit in 2007.  The pie is smaller than it was six years ago and more families are sharing it. 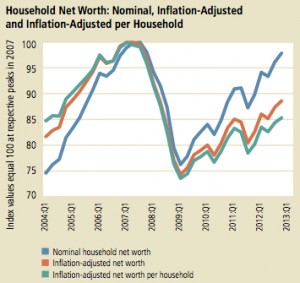 Inflation isn’t factored in. Consumer prices increased about 2% a year since the recession struck, which means our wealth can’t buy as much as before. The dollar’s purchasing power has dropped by roughly 10%.

The chart below shows how the recovery has actually lagged when inflation is factored in.

The recovery has not been experienced evenly among Americans. Wealthier Americans have benefited the most because the majority of the gain (62%) has been due to higher stock prices.

According to the Federal Reserve report,  “Stock wealth is unevenly held, with the vast majority of stocks owned by a relatively small number of wealthy families. Thus, most families have recovered much less than the average amount.”

Will Saving For College Hurt Your Financial Aid Chances?