Baby Boomers and Your Retirement

If you need another reason to start saving for retirement immediately, here is an additional motivation:

A recent study by the U.S. Labor Department suggested that the conventional wisdom regarding workers’ wages over their careers could be dead wrong. It’s widely assumed that individuals’ salaries grow steadily during their years in the workplace, but the report says this didn’t happen for a large group of Baby Boomers that they studied.

The report, which followed the salary history of 10,000 of the youngest baby boomers (born between 1957 and 1964), discovered that the wages of this group actually jumped the most in their 20s and 30s.

College grads under the age of 24, saw their wages increase 9% a year and steady wage growth – between 4% and 6% a year – continued through their 20s and 30s.

These boomers, however, hit a wall when they reached their 40s. The workers saw salary growth of about 1% a year through this decade.

Americans, who did not attend or complete college, experienced the same wage phenomenon as college grads, as you can see in the chart below: 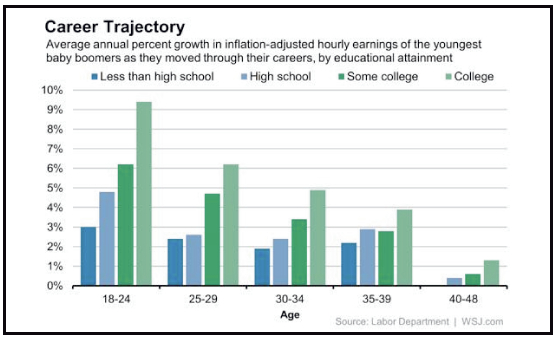 Here is another chart that provides a dramatic illustration of the drop in wage growth as workers age:

Yet another study from researchers at the Federal Reserve Bank of New York that looked at earnings data of millions of U.S. workers from ages 25 to 55 drew a similar conclusion. Americans’ earnings growth is not evenly distributed through their careers. At their peak, Americans are earning 127% more than when they started their jobs in their 20s, but the most growth takes place in the earlier years. In fact, the salaries actually declined for older workers.

So what should you make of this surprising news?

If you are young, you should not delay saving for retirement. Your biggest raises will probably come early in your career and you should take advantage of that wage growth by getting into the habit of diverting some of that money into retirement.

If you spend most of what you make in your early years, you will be used to a higher standard of living and it will be hard to accumulate enough savings late in your career when your income could very well stagnate.