Estimating the Cost of Your Retirement Health Care

One of the biggest budget busters for many retired Americans is the cost of healthcare. Even when retirees reach age 65 and are eligible for Medicare, medical expenses add up.

Just how great the health care costs in retirement will be is difficult for individuals to figure out. A recent AARP survey of Americans shows that only about a third of Americans in their fifties and sixties have tried to estimate their future medical costs.  Those who have tried have woefully underestimated what they’ll need for adequate long-term care. In the survey, 42% of adults between the ages of 50 and 64 thought they’d need less than $100,000 to cover out-of-pocket medical expenses and 16% assumed that they’d require less than $50,000.

Fidelity Investments estimates that the typical married couple in average health who retire at age 65 this year will generate $220,000 in health care bills during the rest of their lives.

A New Tool to Calculate Your Medical Costs

A sophisticated new calculator offered through the AARP can help older Americans form a better idea of their future medical costs.

and plan for retirement spending. The free tool gives users an estimate of how much their healthcare costs will exceed their Medicare coverage. The calculator inquires about such things as individuals’ weight, height, whether or not they smoke, expected date of retirement, as well as medical conditions, and in some cases, their severity.

The free tool, which was created with UnitedHealthGroup, relies on a database of more than $136 billion in insurance claims.

The example below presents the results for a pretend 55-year-old, nonsmoking diabetic (mild symptoms), who had high cholesterol and was overweight.  The example assumes that the pretend individual will live until age 78.

With this example, the calculator estimated that this individual would spend $67,590 beyond what Medicare covered. 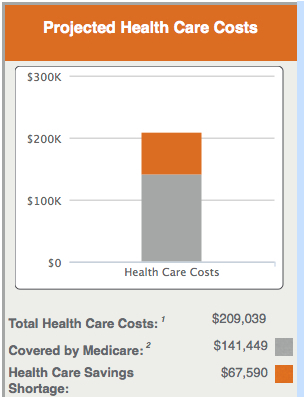 The tool also makes recommendations on how to lower an individual’s projected healthcare expenses. In this example, it made the common-sense suggestions about losing weight and reducing cholesterol levels. When the “healthier weight” box was checked, the calculator estimated that overall healthcare costs would drop by $28,739 and out-of-pocket expenses would shrink by $7,182. 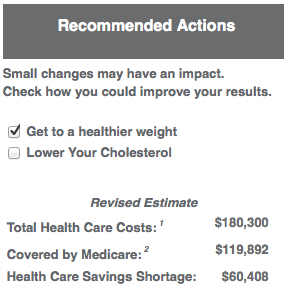 If you fall in the category of retirement minded individuals, it’s never too early to start thinking about your retirement plan so you have an accurate sense of potential healthcare costs down the line. This calculator is a worthwhile tool to motivate you into exploring what kind of healthcare costs you might face in the future. It’s better to plan for these long-term costs than to be surprised someday.