You’ve probably heard this advice a million times by now:  Cut back on your spending and start saving more now. It’s easy advice to give, but it’s harder to pull off.

Two figures in the financial world are suggesting a different approach to saving that appears less painful. Here is what they are advocating:  Save more tomorrow. Instead of saving more right now, you should focus on ratcheting up your savings in the future, suggests Shlomo Benartzi, a UCLA professor, and Richard Thaler, a professor at the University of Chicago, who are leading authorities on behavioral finance.

The academics’ study of 401(k) participants at a Midwestern manufacturing company demonstrated that this approach does work. In the experiment, a workforce of largely blue-collar workers were asked to raise their 401(k) contribution rates when they received their next pay raise. Once they agreed, their contributions to their 401(k) accounts would increase every time the worker received a raise. The employees could opt out at any time. The plan, which was named Save More Tomorrow, yielded dramatic results. Over 28 months, the average savings rate of 401(k) participants more than tripled, from 3.5% to 11.6%.

Why People Are Saving More

So why does the program work so well? 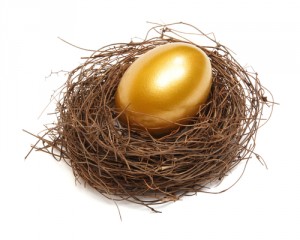 Building inertia into the plan is a big reason for the success. Few workers ever get around to opting out. After a year, only 2% of participants opted out. “Saving more is easy if it’s on autopilot,” observed Benartzi, when he discussed the strategy at a TED talk. The save-later strategy also addresses individuals’ natural aversion to loss. Asking someone to start saving more now requires immediately cutting back on spending which is a turn-off. The company, however, sidestepped this pain of immediate loss by making the request many weeks in advance of the employee raises. And the workers were never required to cut back because they were still able to enjoy part of the raise. “By inviting employees to join a few months before their raise, the plan takes advantage of the fact that for most of us, our self-control intentions about the future exceed our implementations in the present,” Thaler wrote in a paper discussing the strategy. “For example, given the option of going on a diet three months from now, many people will agree. But tonight at dinner, that dessert looks pretty good.”

Obviously, the save-for-tomorrow strategy won’t work if you are approaching retirement with inadequate savings. It can, however, be an excellent way for Gen Xers and Millennials to increase their savings rate and begin to build a solid nest egg.

Is It Possible to Outsmart the Market? Getting More Mileage From Your Retirement Portfolio The Dangers of Chasing Yield