How Your Money Can Buy Happiness

Money can’t buy you happiness or can it?

Michael Nortonopens PDF file , a professor at Harvard Business School, and Elizabeth Dunn, a psychology professor at the University of British Columbia, think they have found the answer to that age-old question.

Most people believe that having more money would make them happier. But, according to the academics, all that stuff you buy – televisions, fancy cars, the latest iPad, and houses with granite countertops and three-car garages – have almost no impact on your happiness.

The professors reached their conclusion after conducting their own research and reviewing a decade’s worth of studies on the subject. You can find the pair’s findings and advice in their new book entitled, Happy Money: The Science of Smarter Spending.

Boosting Your Happiness With Cash

If you want to be happier, the coauthors suggest that you should stop focusing so much on acquiring more money and pay attention to how you can get the most happiness out of the money that you do have.

Here are two ways to use your money to boost your happiness:

Spend on experiences, not stuff

Loading up the cart at Costco, buying a designer outfit or bringing home a fun toy from the Apple Store doesn’t make us unhappy, but it doesn’t make us happier. What can boost the happiness meter is spending on experiences.

The authors provided this example in an article about their research that was recently published in Scientific American: A person could buy a fancy $4,000 TV or devote the money to eating 100 meals at restaurants. Dining with friends and families will create much more happiness, the scholars suggested. An increase in social interaction is a key predictor of people’s happiness.

“We get stuck in thinking that we need to have a house, a car, a flat-screen television to be happy, and so we spend nearly all of our money on these possessions,” Norton observed in theScientific American article. “I try to ask myself before I make any purchase: What else could I be doing with this money? Am I really using this in the best way to maximize my happiness? If not, and this happens with alarming frequency, I put my wallet away.”

Spend money on others 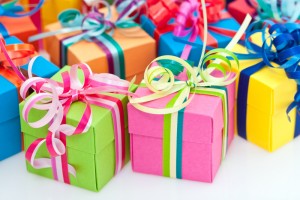 In a series of experiments, Dunn and Norton documented that people also became happier by giving money to charities or by buying gifts for friends and family.

In a blog post for the Harvard Business Review, the coauthors noted that smart managers are using the power of investing in others to increase the happiness of their workers.

At Google, for example, any employee can nominate a coworker for a $150 bonus. Even though this isn’t a large sum for well-paid Google workers, the nature of the bonus can have a big emotional payoff.

Have you ever thought about how money makes you happy? Maybe it’s time that you did.

What Happened To Americans’ Net Worth?

How to Budget for a Vacation

How to Plan Your Business Exit Strategy