As the first quarter of 2015 closes, we are reminded that the world is inherently uncertain, markets are increasingly global, and the requirement for disciplined investing remains critical to long-term success. Following a mixed performance in 2014, stocks worldwide rose in the first three months of the year. The key global headlines for the quarter included a steadily improving U.S. economy, continued strength of the U.S. dollar, low oil prices, questions about China’s growth trajectory, continued Russian aggression, a potential nuclear pact with Iran, uncertainty about Greece’s role in the Eurozone, and diverging central bank policies. With most of the negative headlines outside of the U.S., one might have expected the biggest, “safest” U.S. stocks to outperform the rest of the world this quarter. The opposite occurred. Despite ever present uncertainty, many positive global economic trends are emerging. For example, eight of the world’s ten fastest growing cities last year were in Turkey and China – none were in the U.S. or Europe. Further, the combined middle class of the Asia-Pacific region will outnumber the middle classes in North America and Europe for the first time this year. Consistent with much of recorded history, there is as much to be excited about today as there is to worry about. Surprises will inevitably accompany progress, which is why we continue to passionately espouse a diversified investment approach rather than concentrating portfolios in particular geographic regions or industry sectors.

Asset class returns for the first quarter were as follows:

With U.S. Large Cap stocks (Dow Jones Industrial Average, S&P 500) up nearly 14% in 2014, many investors with globally-diversified equity portfolios – and perhaps an allocation to bonds as well – were surprised to discover that their portfolios attained only modest, low-to-mid single-digit returns for the full 2014 year. This outcome seemed to call into question the value of diversification; if the U.S. is the best performing market, then why would investors want a significant chunk of their portfolio allocated to foreign markets?

The U.S. equity market has had the strongest performance among all 19 developed world markets for two calendar years running, posting a 31.8% return in 2013 and a 12.7% return in 2014. Interestingly, these are the only years in the past 25 in which the U.S. has been at the top of the pile. Last year’s U.S. outperformance was largely attributable to the dramatic strengthening of the U.S. dollar versus foreign currencies. Will the U.S. performance streak continue in 2015? It is impossible to say at this point, but history suggests that the U.S. will eventually “regress to the mean” and relinquish its lead to another country. In fact, over the past 25 years, 14 different countries have claimed the top spot in at least one calendar year, with little or no year-to-year predictability. Only Hong Kong has managed to have a three-year run at the top (1991, 1992, 1993), followed by an immediate plunge to the very bottom (1994). (Source: Dimensional Fund Advisors)

Since predicting which global market will perform best in a given year is nearly impossible, we believe diversification is essential. Additionally, within a stock market as broad and deep as the U.S., there is value in rebalancing among different market segments. Our client portfolios have exposure to U.S. Large Cap, U.S. Small Cap, and U.S. Real Estate stocks (REITs). Over the past five years, these market segments have had quite different return patterns:

All three segments of the U.S. market have delivered excellent – and quite similar – returns over the full five-year period. Perhaps more importantly, the three segments were not perfectly correlated, meaning they did not all deliver this solid performance at the same time. This lack of correlation among asset classes offers investors the opportunity to periodically rebalance a portfolio by trimming the recent outperformer (e.g., Small Cap after 2013), and adding to the recent underperformer (e.g., REITs after 2013). An investor who simply buys and holds a single index fund such as the S&P 500 does not give him or herself an opportunity to benefit from rebalancing opportunities and diversification among asset classes.

Has diversification really added value over time? Let’s compare three hypothetical portfolios over the past 15 years (2000-2014):

Here is how a one dollar investment on December 31, 1999 in each of these portfolios would have performed:

Given the two significant stock market declines included in this period (2000-2002 and 2008), it is not surprising that the more conservative 60/40 portfolio was the best performing portfolio of the three. But notice the extent to which the globally-diversified all-equity portfolio outperformed the U.S. Large Cap portfolio over the 15-year period. A $1 investment in the globally-diversified all-equity portfolio grew to $2.29 (a 5.7% annualized return), while the U.S. Large Cap portfolio grew to $1.86 (a 4.2% annualized return). This illustrates why we believe that diversification will continue to be the only “free lunch” in the investment world, despite the recent outperformance of U.S. Large Cap stocks. 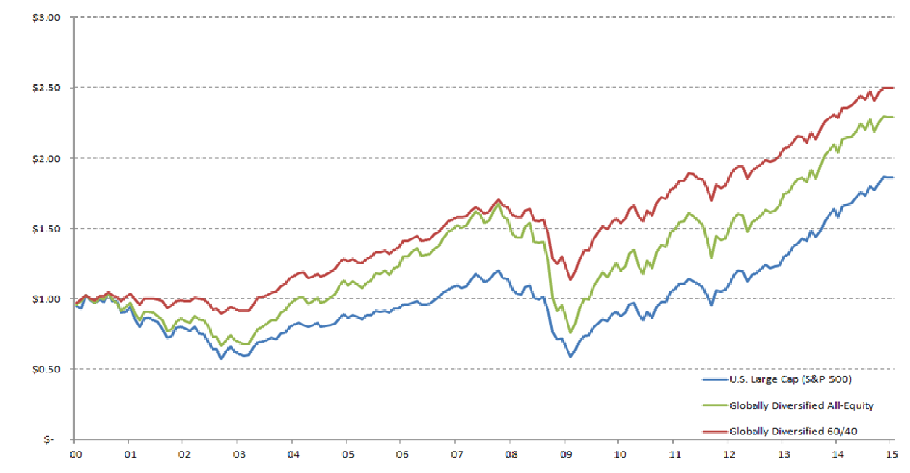 We are proud to announce that Alana Asmussen, CFA, CFP® and Mike Brown, CFA, CPA, CFP® are now Partners in the Firm. Alana has been with the Firm since 1995 and has held various positions including her current responsibilities as Director. Mike has been with the Firm since 2012. Prior to joining the Firm he was a Partner at Deloitte, a global accounting, financial advisory, and consulting organization, where he spent fifteen years working with public companies and private equity investor clients. We stress that our advisers demonstrate exemplary client focus, master deep industry knowledge, and obtain advanced degrees and industry-leading credentials, such as the CFA and CFP®. Alana and Mike exemplify our standards. We are excited and proud to have them as Partners to help drive the vision of the Firm for years to come.