Following a strong finish to 2015, financial markets took investors on a harrowing ride during the first quarter of 2016.  After losing 11% of its value in the first six weeks of the year (through February 11th), the S&P 500 Index reversed course and finished the quarter in positive territory.  This volatility, which began affecting markets in the second half of 2015, can be attributed to numerous economic and geopolitical developments across both domestic and foreign markets.  China’s currency devaluation, falling oil prices, and uncertainty over the Federal Reserve’s plan to hike interest rates seem to have captured the lion’s share of investor attention.

Asset class returns for the quarter and year-to-date were as follows:

Investor anxiety over these potential threats to the global economy has receded since mid-February due to a favorable turn of events.  Despite China’s devaluation of its currency in January and other developing countries following suit, fears of a currency war have thus far proven unfounded.  Oil prices have also rebounded from February lows.  Similarly, the U.S. Federal Reserve has gone from suggesting four rate hikes this year to possibly just two.  Nonetheless, investors remain concerned that market volatility could quickly return.  As students of market history, we believe that volatility is the norm, rather than the exception.

While it may seem that recent stock market turbulence has been above average, market data shows that over the last four years stocks have been less volatile than the historical norm.  The graph below looks at the number of days the S&P closed more than 2% higher or lower than the previous day.  This happened an incredible 72 times back in 2008!  It is clear that volatility has been much higher in the past. 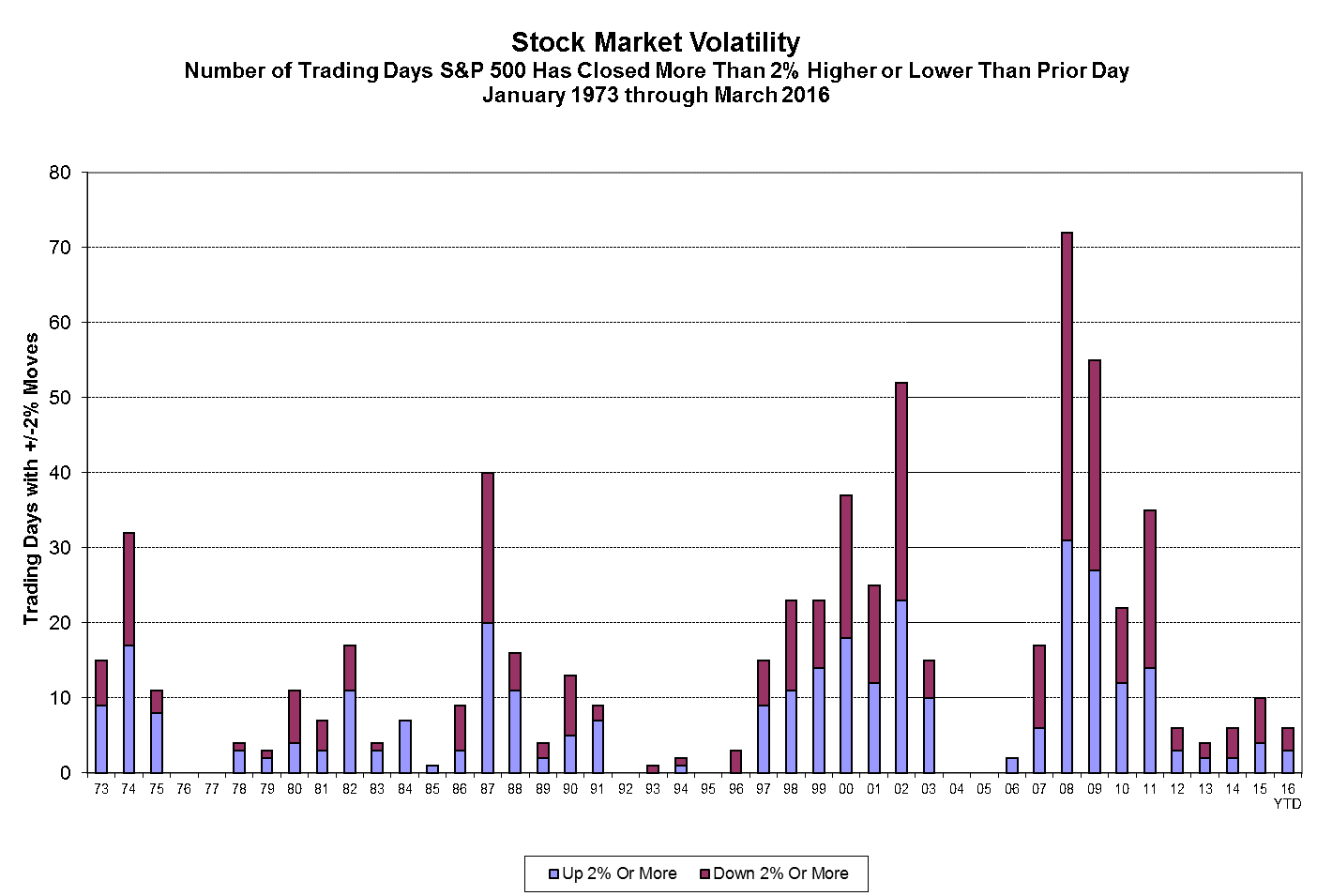 When stock prices decline, it is tempting to get out of the market until “circumstances improve” or the “outlook gets better.”  However, had you sold in January or early February you would have missed the 12% rebound in the S&P 500 in the last seven weeks of the quarter.  Anyone who tries to time the market has to be correct twice – when to get out and when to get back in.  History shows that very few investors get both decisions right.  A better strategy is to follow a disciplined approach to rebalancing and ignore the sometimes dramatic, short-term price movements and the crisis atmosphere created by financial media.

We certainly understand that it is painful to watch portfolio balances decline.  However, short-term market gyrations also create opportunities.  During the first quarter of 2016, we took advantage of the stock market downturn to rebalance client portfolios where appropriate.  That meant trimming fixed income (bond) exposure and adding to equity (stock) holdings.  In other words, we bought stocks while they were on sale.  Practically applied, this philosophy is closely aligned with Warren Buffett’s advice:  “Be fearful when others are greedy, and be greedy when others are fearful.”

In taxable accounts, we also took the opportunity to harvest tax losses.  We sold stocks that showed sizeable losses (trading below purchase price), which generated capital losses that can be used to offset capital gains and reduce taxes.  Capital losses can also be used to offset ordinary income of up to $3,000 per year.  Since capital losses do not expire, they may be used in future years.  Stocks sold were either replaced with similar securities (e.g. substituting Pfizer for Merck) or repurchased approximately, but no sooner than, thirty-one days later.  In this way, we were able to maintain or increase equity exposure while creating a valuable current and future tax benefit.

In summary, our overarching investment goal is to maximize our clients’ after-tax rate of return within risk parameters dictated by their personal financial situation and tolerance for volatility.  Rebalancing and tax management are critical to this effort.  We recognize that further volatility most certainly awaits, so we remain focused on the factors that most directly impact investor outcomes – managing risk, managing costs and taxes, diversification, and disciplined rebalancing.

We thank our clients for their continued trust and support.  We hope the year is off to a great start and invite you to contact us with any questions or concerns regarding your finances.