“If you find it puzzling, your brain is working correctly.” -Charlie Munger

Financial markets and the economy are mystifying at times, even to the most seasoned investors.  Ongoing domestic and international disputes – coupled with lingering effects of the multi-year pandemic – continue to instill feelings of instability and angst amongst investors.  The second quarter brought numerous economic and geopolitical events into focus:

Second quarter returns for equity and fixed income asset classes were lower across the board:

With the U.S. stock market dropping into bear market territory and high inflation affecting consumers and businesses, many investors are now asking whether an economic recession is imminent.  What exactly is a recession?  The word itself may conjure economic turmoil, with people losing jobs and falling asset values.  The actual definition of a recession, however, is a bit murky.

Here is how the National Bureau of Economic Research (NBER) defines a recession:

“A recession is the period between a peak of economic activity and its subsequent trough, or lowest point […] The NBER’s definition emphasizes that a recession involves a significant decline in economic activity that is spread across the economy and lasts more than a few months.” (www.nber.org/research)

Since the end of World War II, there have been a dozen recessions in the U.S. lasting about 10 months on average – some longer and some much shorter (the recession of 2020 lasted only two months!).  It’s not uncommon for investors to think of the economy and the stock market as one and the same, but they are certainly not.  The economy and stock market are not always synchronized, and, generally speaking, news investors receive about the economy (unemployment levels, GDP growth, corporate earnings, etc.) reflect data and events that have already happened.  We will likely already be well into a recession by the time it becomes official.  Financial markets tend to decline in advance of a recession and start to rise before the economy improves.  As detailed in the table below, the good news is, after a recession, the stock market generally does well over long periods of time: 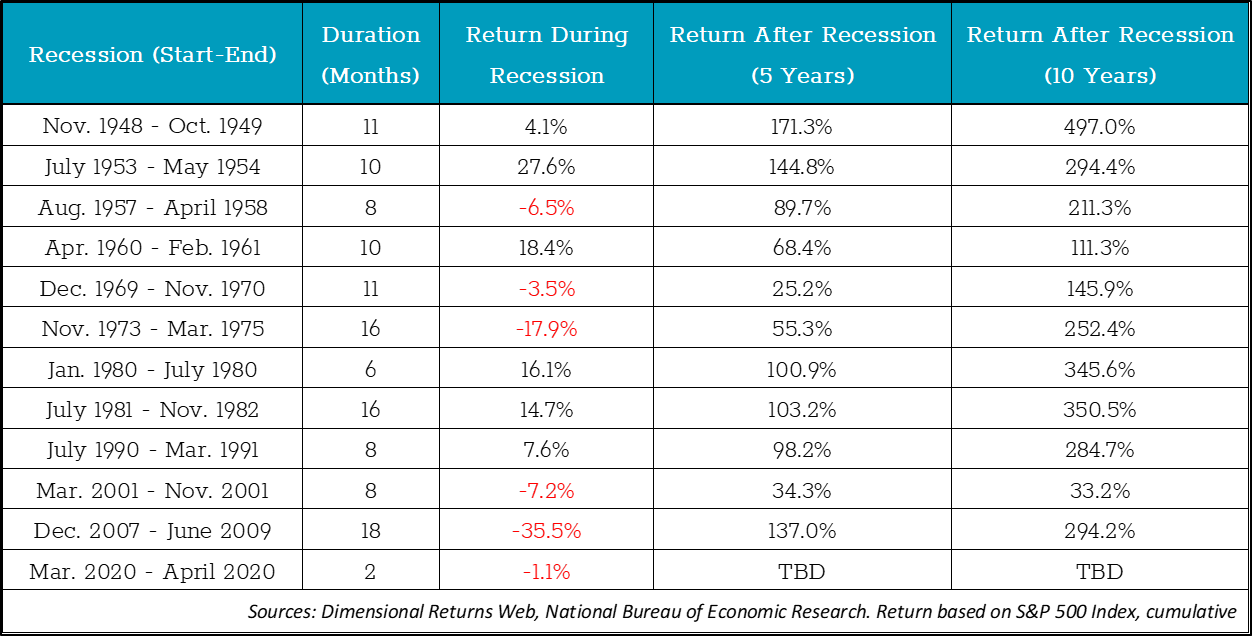 The current market environment shares similarities with the dot-com boom and bust of the early 2000s.  In the “boom” portions of each cycle, technology stocks soared at a seemingly unsustainable pace, getting far ahead of actual earnings.  Speculation in stocks of unprofitable companies was rampant and day trading became a popular pastime.  In the “bust” portion of each cycle, these same technology and speculative stocks fell quickly back to earth.  The magnitude of the dot-com stock market correction was greater than the current correction.  However, it is stunning to see some of the quick downturns in once high-flying stocks and speculative asset classes this year.  Bitcoin, for example, is down over 57% through June 30, 2022.  During this same period, the components of the widely followed “FAANG” stocks (Meta Platforms, Apple, Amazon, Netflix, and Alphabet) are down 52%, 23%, 36%, 71%, and 25%, respectively (Source: YCharts).

What is different about today’s market environment is there does not appear to be just one single cause to the market correction, but multiple factors.  Looking back at the last several downturns, it is easier to pin down one or two primary causes.  The market crash of the early 2000s can be attributed to a speculative technology stock bubble that inflated and popped, the Global Financial Crisis of 2007-2009 was largely due to easy credit and lax lending standards that ignited a housing bubble, and the most recent 2020 stock market downturn stemmed from the economic impact of the global shutdowns at the onset of the COVID-19 pandemic.  Today, a myriad of factors is affecting the economy and market: high inflation, the conflict between Russia and Ukraine, the Fed raising rates at a feverish pace, global supply chain issues, and factory shutdowns from some of our major trading partners (e.g., China) due to the ongoing pandemic.

Market conditions could get worse from here – or the worst may already be behind us.  Although it is nearly impossible to predict the exact timing of the next recession, there are a few historical gauges that have indicated a looming recession in the past:

So, what are some scenarios for where the economy and stock market go from here?

While we do not attempt to predict the short-term direction of the stock market, we remain optimistic about the long-term outlook for both the U.S. economy and equity investments. Stock market valuations are now becoming more reasonable with the S&P 500 Index trading at about 16 times forward earnings, slightly below its long-term average (contrast this with stocks trading at approximately 30 times earnings in early 2000).  U.S. corporations are still sitting on historically high levels of cash, which will eventually be used for capital investment – or to provide a buffer during a recession.  The stock market may not turn around this month, this quarter, or even this year.  Nonetheless, for investors with long time horizons and with the emotional wherewithal to tolerate the inevitable ups and downs, we believe that stocks will continue to generate attractive long-term returns.

How to Take Advantage of Down Markets

It can be helpful to remember that there is a silver lining to down markets.  Here are several ways you can turn those “lemons into lemonade” while the stock market is lower and economic uncertainty lingers:

Market volatility can feel unsettling and uncertain.  But by controlling what you can control, you can make sound financial decisions even in challenging times. We encourage you to call or e-mail anytime you would like to discuss your portfolio or other financial matters.

On the Rise: Geopolitical Tensions, Inflation, and Interest Rates