Will the Election Affect My Investment Portfolio?

“A plan is only useful if it can survive reality.  And a future filled with unknowns is everyone’s reality.”

If the year 2020 could be described with one word, it should be “uncertainty.”  We continue to navigate through a global pandemic with profound economic implications, coupled with changes in our everyday way-of-life.  Stock market volatility returned late in the third quarter with large technology companies disproportionately rising and falling compared to the broad market.  Most recently, President Trump announced he and the First Lady tested positive for COVID-19, elevating the level of uncertainty regarding not only the election but also the running of the government prior to the election.  Other notable market events during the quarter included:

The Election and Your Portfolio

We are now about a month away from what may be the most controversial presidential election of our lifetimes.  Emotions are particularly elevated, given the polarizing media, social unrest in many cities, the pervasive influence of social media in our day-to-day lives, and heightened stress related to the COVID-19 pandemic and its economic fallout.  It seems that every four years the same questions come rushing back into investors’ heads — “Should I sell now and wait until the dust settles?”  “If (insert candidate’s name) wins, should I change my investment strategy?”

While current polls and betting markets show former Vice President Joe Biden ahead of President Trump, the unknown impact of an unprecedented number of mail-in ballots may result in a delay of days, if not weeks, for a final determination of the winner.  Many of us remember the closely contested 2000 presidential election between former Vice President Al Gore and President George W. Bush, in which the outcome was decided by the United States Supreme Court a month after the election.  Adding to the complexity of this year’s election is the vacant Supreme Court seat left by the passing of Justice Ruth Bader Ginsburg.  President Trump has exercised his authority to nominate a replacement Supreme Court Justice and is encouraging an expeditious confirmation process by the Republican-led Senate prior to the November 3rd election.  One thing is for certain:  The next president will have a daunting task — managing the country’s recovery following a global pandemic that caused unemployment to rise to levels not seen since the Great Depression and slowed the economy to a crawl.

What does this all mean for your investment portfolio?  Given the relative stability of our economic system, U.S. history has shown there is not a “preferred” political party for the overall stock market.  In other words, there is not consistent evidence that a Republican or Democratic president leads to higher stock market returns.  Furthermore, when we examine historical eras when a president’s own political party simultaneously holds control of Congress (the House of Representatives and the Senate), the data becomes even murkier.  Assuming our underlying economic structures remain substantially consistent, making emotional investment decisions based on political preferences could impact your financial life far longer than a president’s time in office. 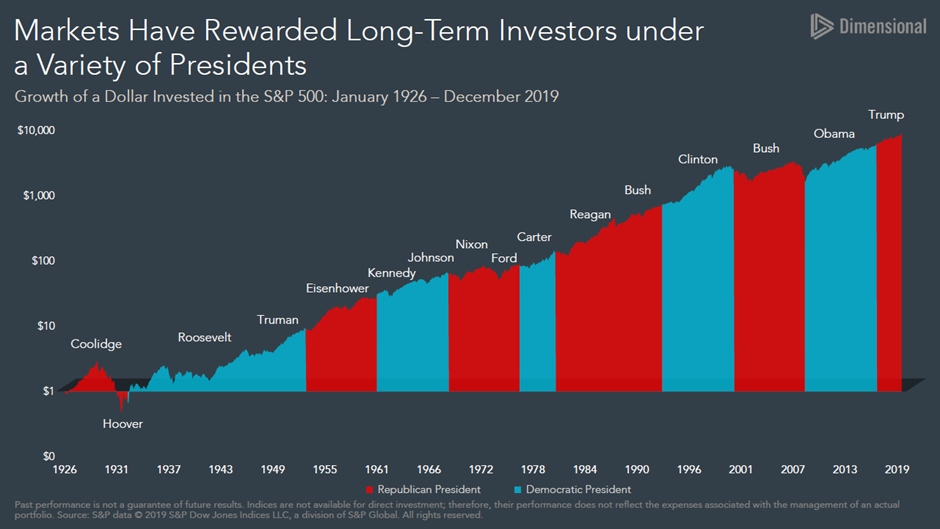 When a president comes into office, the prevailing economic and market environments undoubtedly alter a president’s legacy (or lack thereof).  Economic and market metrics — interest rates, stock market valuations, unemployment, tax rates, inflation, and economic growth — are always different.  By design, the president has very little direct control over the Fed and monetary policy.  When looking back through history, the Fed may have an even more important role in long-term economic conditions than the president.  The upcoming election is bound to generate some volatility, but it is not something that can be “traded” ahead of time without taking substantial risk of getting it wrong.  A study by Vanguard showed that from January 1, 1964 to December 31, 2019, the volatility of the S&P 500 Index was 13.8% in the 100 days before and after a presidential election.  This was lower than the 15.7% annualized volatility for the full 56-year time period.

Although we believe it is risky to make investment decisions based purely on the outcome of the election, a change of administration could significantly impact tax and estate planning   strategies.  If former Vice President Joe Biden prevails and the Democratic Party gains control of Congress, there may be a limited window of time around year-end for some individuals and families to mitigate the impact of a presumably more progressive income and estate tax regime.

Key income tax provisions from the Biden campaign include:

President Trump, on the other hand, has not disclosed his proposed tax policy for a second term but has made numerous comments indicating a push for additional tax cuts if re-elected.  It is also widely expected that the Tax Cuts and Jobs Act, scheduled to expire in 2025, would be made permanent.

Whatever happens to income and estate tax policy, we will be prepared to discuss and plan around the potential impact on your specific financial situation.

As we enter the final months of 2020, we would like to remind you of some potential tax saving strategies to consider.  For those who are charitably inclined, appreciated stocks may be prime candidates for gifting.  Subject to IRS rules and limitations, a security held for more than one year and one day can be gifted to a public charity while the donor may receive a tax deduction.  The amount that can be claimed as a charitable deduction for federal income tax purposes is the fair market value of the security on the date of the gift.  For the donor, gifting an appreciated security  is oftentimes superior to giving cash since the gift of appreciated assets results in a tax deduction and no capital gains tax is paid on the appreciation of the gifted security. For 2020, cash gifts can also take advantage of a temporary 100% of Adjusted Gross Income (AGI) deduction limitation put in place by the CARES Act.  In addition, those who are over age 70½ may consider making a Qualified Charitable Distribution (QCD) from traditional IRA accounts.  The gifted portion up to $100,000 is excluded from taxable income and QCDs can be made in 2020, even though Required Minimum Distributions (RMD) have been waived for this year.

We appreciate the trust our clients have placed in us to guide them through these very challenging times.  Although the fall season may feel a bit different this year, we hope you and your family enjoy the holidays.  We encourage you to call or e-mail anytime you would like to discuss your portfolio or your financial plan.